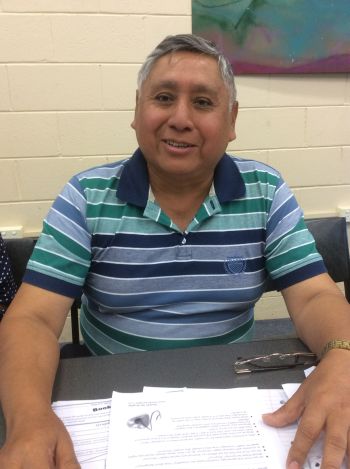 Congratulations to Pedro Luna, PRACE volunteer and student, on his nomination in the Learn Local Awards.

Pedro has been nominated  for the Ro Allen Award which recognises pre-accredited learner excellence.  The award goes to a learner who has established pathways for themselves into further education, employment or volunteer roles as a result of their participation in an ACFE-funded pre-accredited program.

We are thrilled for Pedro and look forward to hearing the outcome on August 30th.

Read more about Pedro’s achievements below.

When Pedro arrived at Preston Reservoir Adult Community Education (PRACE) in 2016, he lacked confidence and direction as a result of long-term unemployment. Pedro came from Peru where he worked as an electrical engineer. On arrival in Australia he planned to continue his career in electronics but couldn’t find employment in his field. He got a job installing cable TV, until the work dried up.

Enrolling in PRACE changed his life. He undertook several courses including Train the Trainer (iPads for Seniors) and Technology for Seniors. Pedro demonstrated impressive versatility and initiative in the classroom as a learner and became a senior volunteer for projects such as helping people in nursing homes develop iPad skills.

Pedro’s now a PRACE ambassador with a reputation for being a ‘go-to’ person. He’s currently enrolled in Certificate III in English as an Additional Language and aims to tutor people of all ages in mathematics and digital literacy.

For more about the Ro Allen Award and the nominees please see the link below.